Board members, students and friends of the Jérôme Lohez 9/11 Scholarship Foundation met informally for cocktails and small bites on the rooftop of the Empire Hotel, near Lincoln Center, on Friday, April 30th, in honor of Columbia University’s virtual Commencement that morning. We thank French journalist Laura Geiss for the photos.

The Jérôme Lohez 9/11 Scholarship Programs are On Pause in 2020. As we continue to monitor developments related to the 2019 novel coronavirus (COVID-19), it is important to gather facts, take preventive measures, and plan for a variety of scenarios. The Jérôme Lohez 9/11 Scholarship Foundation has decided to pause 2020 scholarships due to the uncertainties of international student enrollments and the difficulties of international travel. We will re-open our scholarship programs in 2021 in due course.

During this pause, the Jérôme Lohez 9/11 Scholarship Foundation will reflect, create and renew.

A French student from the Stevens-EPITA Dual Degree Program just made the very generous and anonymous donation of $9,000 to the 9/11 Scholarship Fund. In these very unsettling times of the COVID-19 virus, forcing us to cancel our annual gala, this gift renews our faith in the human spirit, going to the core of of the foundation’s mission.

We are very concerned about the health and well-being of our students and supporters such as you, your families and friends, in these unprecedented times of the COVID-19 pandemic, here in New York and around the world.

Our previously scheduled  15th Annual Awards Ceremony on May 11th is hereby cancelled, keeping in line with “social distancing” guidelines. However, please take this opportunity to make a donation to support our scholars.

To me, America is in essence the land of willpower,” said Pierre Savary, a 2015-2016 Lohez Foundation Scholar. “This is made visible by symbols such as the Freedom Tower, built in the aftermath of the biggest terrorist attack in US history, where the Twin Towers once represented New York, and it is now the highest skyscraper in the Western Hemisphere.”

During his undergraduate years at Sciences Po in Paris, Pierre had already had the opportunity to study in the United States, spending a year abroad at the University of California-Berkeley. There he studied in the Departments of Religious Studies and Peace and Conflict Studies. “I went to UC Berkeley and studied in SIPA’s International Security Concentration,” he said, “to learn more about terrorism from an academic perspective and understand better why some people of my age, sometimes even younger than me, choose the path to violence. In France I got involved in interfaith dialogue activities as a way to promote French society’s cohesion.”

At UC Berkeley, Pierre also discovered California’s culture of creativity and entrepreneurship, where hard work combined to enthusiasm and a vision for the future makes everything possible. “In California I witnessed a sense of faith in the future that today’s Western societies often lack. I understood that fighting extremism is useless without an alternative vision for the world we want to live in, a vision that appeals to all and everyone.”

While completing his dual degree in International Security at Columbia University, Pierre served as an intern at the Consulate General of France in New York City. There, he drafted speeches and other official communications for Consul General Bertrand Lortholary and other diplomatic personnel. It was a position that afforded him special insight into the workings of a diplomatic outpost immersed in the day-to-day issues of foreign relations. After graduation, Pierre spent several weeks training in a military camp in Southern France to become a reserve soldier in the French Army. “As a reserve soldier,” he said, “I will protect tourism sites, but also religious places: churches, synagogues, and mosques.”

Pierre describes himself as very attached to the French concept of laïcité, which ensures that the State treats fairly and equally protects all citizens regardless of their beliefs and religion, and opposes the politicization of religious identities. To him, laïcité is a necessary component of the republican ideal that he wishes to serve through his professional life. “Promoting French society’s unity”, he said, “implies tackling the spread of all perilous ideologies and communitarianism, as well as the rampant inequalities that weaken our social fabric. Social justice is another major component of the Republican and French ideals I believe in.”

Pierre also worked for a while at the French Embassy in Amman, Jordan. Back in Paris, his path also led him briefly to the Ministry of the Interior and the Ministry of Higher Education, Research and Innovation.

In 2019, Pierre was accepted to the Ecole Nationale d’Administration, a grand school training future senior civil servants, which churned out presidents, ambassadors and industry leaders for decades.

The Jurors of the Jérôme Lohez 9/11 Scholarship Foundation recently announced the recipients of the 2018–2019 scholarship awards. The scholars are:

The Jérôme Lohez 9/11 Scholarship Foundation held its annual Awards Gala on May 1st, 2019 at the National Arts Club. 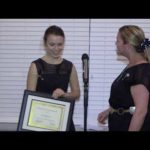 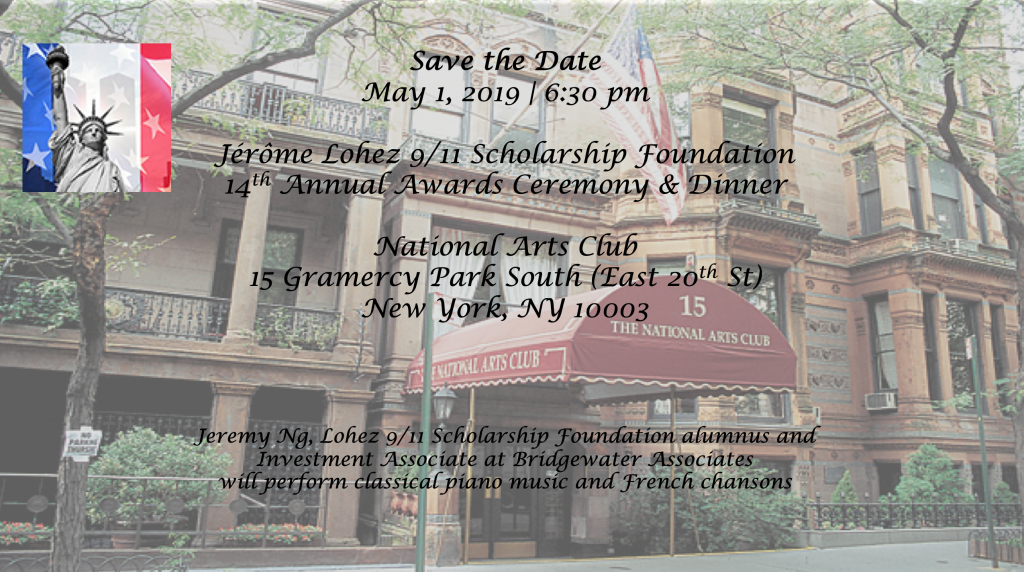 The Jurors of the Jérôme Lohez 9/11 Scholarship Foundation recently announced the recipients of the 2018–2019 scholarship awards.

On the 17th anniversary of the 9/11 attacks on the United States, the Jérôme Lohez 9/11 Scholarship Foundation, which endeavors to bring good from tragedy, looks optimistically to the future with these profiles of selected scholarship recipients. 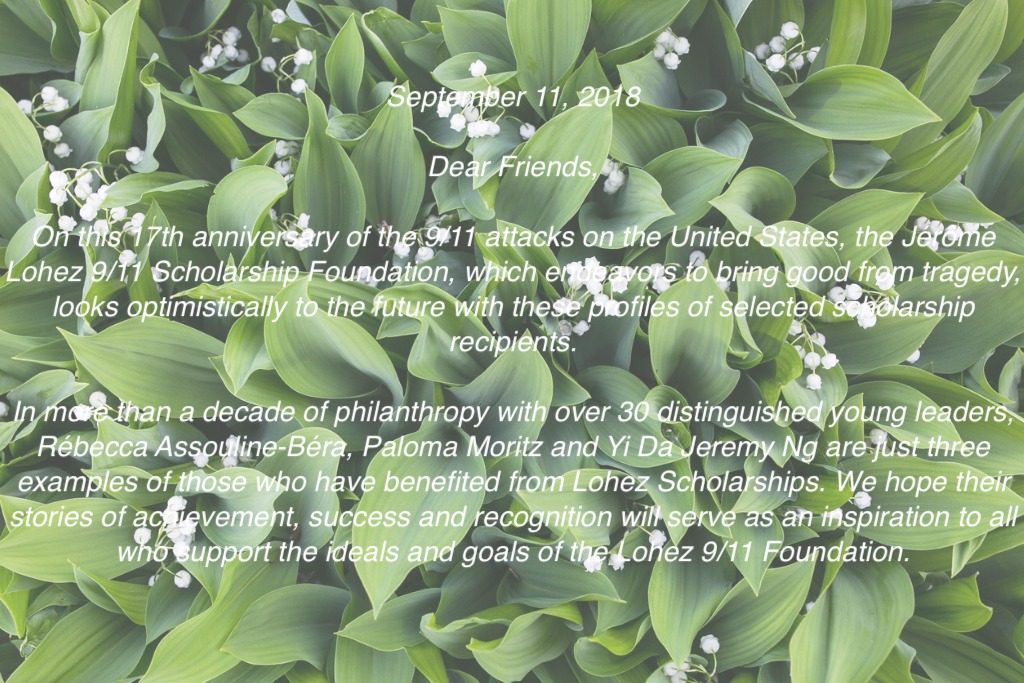 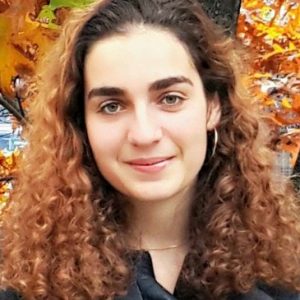 “Enhancing Euro-American unity and trans-cultural understanding will undoubtedly be a guiding principle throughout my professional career.”

Rébecca Assouline-Béra, received her Lohez scholarship in 2015 and pursued a Dual Bachelor’s Degree in Economics from Sciences Po/Columbia University. A native of French Martinique, she was eager to tackle global issues and deeply influenced by Al Gore’s documentary ‘An Inconvenient Truth’. While studying at Sciences Po’s Euro-American campus in Reims, she became aware of America’s shared values and history with Europe, and the continuing importance of close transatlantic relations.

Joining A.T. Kearney in New York in August 2017 as a Business Analyst, in less than a year, Rébecca was promoted to Senior Business Analyst in June 2018. This consultancy, with offices in more than 40 countries, helps companies transform from within, continually accelerating momentum to stay ahead of marketplace disruption, constantly pushing the envelope, stretching the imagination, resulting in market-leading performance.

While other elite management consultancies strive to be detached, analytical, and formulaic, A.T. Kearney consultants are collaborative, personable, and entrepreneurial, immersing themselves in a company to gain deep insight into operational and strategic potential. This is well suited to Rébecca, where weekly travel to clients in many different states, from Ohio to Louisiana… brings her surprises and new challenges to tackle!

A.T. Kearney is one of only 100 leading global companies selected as a Strategic Partner of the World Economic Forum. 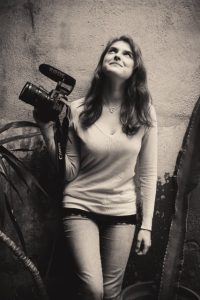 “Spice up your mind and open a new window on the world!”

Paloma considers herself a citizen of the world. During her life and academic path, she has always sought new challenges, the discovery of new cultures and different ways of learning, in order to reach a global understanding of our contemporary world.

After receiving her bachelor’s degree in social sciences from Sciences Po and spending a year at UCSB (University of California Santa Barbara), she enrolled in the dual degree program in Communication and Journalism with Sciences Po’s School of Communication and Fudan’s Journalism School in Shanghai; she was a 2015 Lohez scholar.

Since September 2015, she works for Spicee, a new online media firm that features original, international documentaries on demanding subjects. Its mission? “Spice up your mind” and open a new window on the world. As a journalist and documentary maker, Paloma’s fervent desire is to explain the world to the widest audience in order to raise awareness of contemporary issues such as new political organizations and movements, women’s rights and environmental challenges, and in the process, strive to spark change!

Over the past three years, she has made a dozen documentaries for Spicee, helping define the editorial line while developing partnerships and organizing conferences…

She made several documentaries on participatory democracy, new political movements and civic tech platforms in France. Among them are Tous Président, a film on an online tech platform to designate candidates from civil society to run for President in the 2017 elections, and Moi, Charlotte Présidente. She is also co-founder of Mieux Voter, that aims to promote “Majority Judgment”, a new voting system.

At the same time, with two other journalists, she created a TV show called Ecoutes les filles, which invited women to discuss gender issues, violence against women, eco feminism, and fight against women’s misrepresentation in the media.

In 2018, she made several documentaries about citizen actions to help eradicate violence against women and raise funds for La Maison des Femmes de Saint Denis, a home that welcomes and heals women who have been victims of violence.

“College, for me, served as a time to explore new interests.”

A desire to chart new waters led Jeremy to undertake internships in France, China, Singapore, Tajikistan, the United Kingdom, and the United States, working in sectors such as finance and international development. As a result of this experience, he developed a strong desire to leverage private capital to finance projects in the developing world, particularly in under-served areas such as Central Asia.

Of his summer at the Eurasia Foundation of Central Asia in Tajikistan, helping design and implement social protection and civil society projects, Jeremy says: “This was really meaningful work, as I could see from site visits how our projects had improved the lives of vulnerable communities such as people living with HIV, or victims of gender-based violence.”

Jeremy just finished up an internship at the United Nations, a very good opportunity to put the skills he learned through his degree program in information science towards real life humanitarian data. He worked primarily on a report entitled “World Humanitarian Data and Trends” which will be published in December 2018.

He will start a full-time job at Bridgewater Associates on September 10th, 2018, a firm which strives for an idea meritocracy in which meaningful work and meaningful relationships are pursued through radical truth and radical transparency. It requires people to be extremely open, air disagreements, test each other’s logic, and view discovering mistakes and weaknesses as a good thing that leads to improvement and innovation.

Contrasting his expertise in information technology and data, Jeremy is also a gifted musician. In addition to his virtuoso improvisation at the 2018 Awards Gala, his most recent performance was a joint concert with Peking University at Lincoln Center in mid-May, celebrating Peking University’s 120th anniversary. 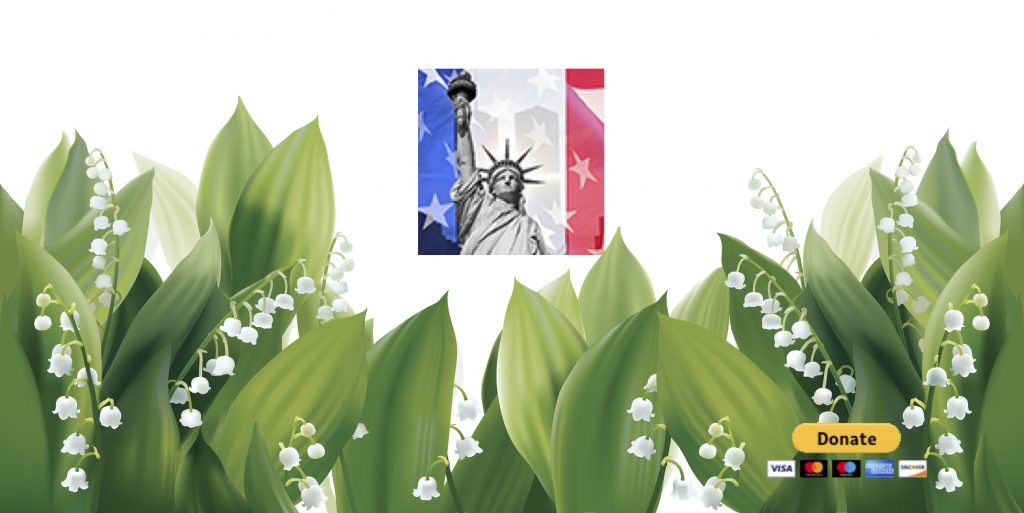