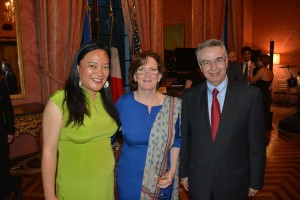 On the evening of May 14, 2015, the Jérome Lohez 9/11 Scholarship Foundation staged its 10th Anniversary Celebration and Scholarship Award Presentation in the Rose Salon at the French Consulate in New York City.

Arriving guests were greeted by the late afternoon sun streaming through the Rose Salon’s curtained windows, with the tall trees and greenery of Central Park illuminated opposite the Consulate. The popular sounds of Carla Virola and the Carla V. Band served as a musical bed throughout the early meet-and-greet, featuring cocktails and passed hors d’oeuvres, which accommodated the growing complement of attendees during the first hour.

Ms. Virola, an actress, singer and musician, who served as Emcee for the evening, called the crowd to order shortly before the opening remarks from the Consul General Deputy Mr. Bernard Faro, who noted the 10-year history of the Lohez Foundation and its long association with the officials of the French Consulate, past and present.

Ms. Virola then offered a welcome to all who had come to celebrate Foundation’s 10th Anniversary and the 2015 Scholarship Award Presentation.

“This is an exciting one-decade anniversary year for the Lohez Foundation,” she said. “Not only is the Foundation awarding scholarships to a new class of five international students. It is also actively recruiting and welcoming new members to its executive board of directors. In a few weeks, it will debut a terrific new tri-lingual website” created by Ms. Kelsey Holland of Tranquility49 PR.
Ms. Virola noted also that portions of the event were being videotaped, to be featured on the new website, and that announcements would be made in advance of the Foundation website’s go-live date.

Ms. Virola then introduced the “Founder of the Lohez Scholarship Foundation, a global citizen who is an educator in her own right, Ms. Dening Wu Lohez.” 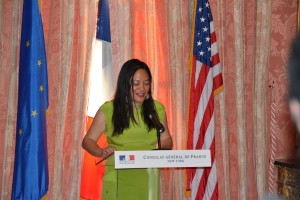 Ms. Lohez spoke briefly but movingly of the work of the Foundation.

“In this year of 2015,” she said, “the Lohez Foundation finds itself confronted by new and expanding horizons. From a small scholarship foundation with a special mission, we have begun a steady transformation into a global educational exchange and charitable organization.

“As many of you know,” she continued, “the US and French authorities announced this past January their willingness to double by 2025 the number of student exchanges between their countries. At the same time, the exchange of students between France and China will increase to 50,000 students per year from 35,000.

She concluded: “This clearly is the opening of a new opportunity for the Lohez Foundation to partner with new institutions, to work with new young global leaders and to make a lasting difference in the interconnected world that we live in.”

Appropriately, the next speaker to the podium was the Director General of the École Pour l’Informatique et les Techniques Avancées, better known as EPITA, Dr. Joël Courtois, who had traveled from Paris to New York to attend the celebration. Jérome Lohez was himself the recipient of a dual-degree from EPITA and Stevens Institute of Technology, and the latter institution was the scene of the first meeting between Mr. Lohez and his future wife, Ms. Dening Wu. 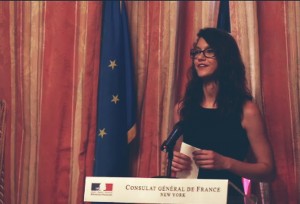 Next Dr. Anne B. Waters presented to the 2015 Lohez Foundation Scholar Ms. Juliette Faure, who has pursued a dual degree between Sciences Po and Columbia University SIPA. Dr. Waters acted as a Lohez Foundation Scholarship Selection Committee Member for 2015, and had served until earlier this year as a senior associate dean of Columbia University’s School of International and Public Affairs

Next, Mr. Antoine Desir presented to 2015 Lohez Scholar Ms. Barbara Crépeau, who has pursued a dual degree between EPITA and Stevens Institute of Technology. Mr. Desir is 2012 Lohez Scholar and a dual-degree graduate of Columbia University / École Polytéchnique. He is currently a Ph.D. candidate in Operational Research in the Columbia University Department of Mathematics.

This evening also featured a virtual guest from France. One the 2015 Lohez Scholars, Mr. Soliman Elcheikh, could not attend the evening in person, as he was completing his final exams at Sciences Po in Paris. “However,” said Ms. Virola, “he has provided us with taped remarks from what appears to be a very scenic location on the Mediterranean.”

Introducing Mr. Elcheikh’s remarks was Ms. Sibylle Eschapasse, who works as an employee of the United Nations and is a frequent contributor to Paris-NewYork.tv. She is also president of the Association of French International Civil Servants in New York. 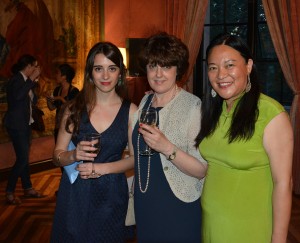 Ms. Virola then read a list of thank-yous that Ms. Lohez had provided, citing a number of guests and supporters, including:

Ms. Lohez also extended special thanks to Ms. Sibylle Eschapasse and Ms. Karen Wang, who brought many guests to the evening’s event.

“As always,” Ms. Virola said in closing, “please consider making your most generous donation to the Lohez Foundation. Your donations allow the Foundation to continue the important work it does for emerging young leaders around the world, some of whom we have had the privilege to meet this evening.”

Once again this year, fine wines were donated to the occasion by Pernod-Ricard USA. Fine catering was provided by Diane Gordon Catering Services. Baked gourmet desserts were donated by Ms. Yu-chen Juang. Multimedia services were provided by Jason Guzman and Anastasiya Tarlikova of Tranquility49 PR, as well as by independent photographers Ms. Miao Hong and Mr. Te Wu.

Invaluable assistance on the part of the Consulate Events Staff was provided by Ms. Aurélie Cole and Ms. Claire Voisin, as well as Mr. Yann Yochum of the Press and Political Office.