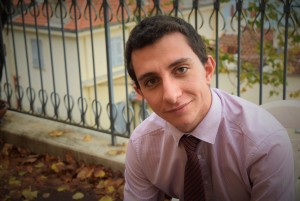 Soliman Elcheikh is currently a dual-degree undergraduate at Columbia University. Though he arrived for the first time in the United States from France in September 2015, he had read a lot about the country in books and daily newspapers, and he was curious and excited to see what was in store upon his arrival. In residence at Columbia, he wanted to experience life in the territory beyond New York City, spending most of his last winter break exploring more of the East Coast. He plans to travel through the Midwest and to the West Coast next summer.

Soliman also finds that his courses at Columbia help him to understand better the internal and external dynamics of the United States. “My experience here in the United States helps me to grow every day and learn from my environment,” he says.

As a boy and young adult, Soliman grew up experiencing multiple cultures. He was raised in Egypt, and attended French-language schools during his childhood. His education in Egypt prepared him for his undergraduate years attending Sciences Po in France.

No matter how culturally diverse Soliman’s background is, he believes that nothing can really prepare anyone for the melting pot that is New York City. He calls it a “microcosm of the world,” where you experience interaction between and among every culture on a daily basis, where different communities can peacefully live together. “There is without a doubt a lot to learn from this experience,” he says.

He is also overwhelmed by the beauty of the city, most notably the Manhattan skyline as seen from Brooklyn.

Recently, while crossing the Williamsburg Bridge back to Manhattan, he observed the sunset, “and the magnificent rays of light were speaking everywhere. I watched with an unwavering gaze as the threads of light were dyeing all the tall buildings first orange, then red, and later dark blue. When night had taken over,” he says, “all building lights were sparkling like infinite stars in the sky. It was an extremely poetic moment that I will never forget.”

Having studied in France, Soliman notices an interesting contrast between the academic structures of France and the United States. First, he noticed that in France the coursework is lighter, yet more intellectually demanding, asserting that “originality and critical thinking are two basic skills that you would naturally develop.” He finds the teaching in the United States to be more pragmatic. While there is always room for discussion and debate, he finds the assignments to be skills-oriented, requiring less “out-of-the-box” thinking. “These two approaches are complementary,” he explains, “and you need both to be successful.”

While Soliman has a broad global perspective from traveling and previously studying in France, he finds that it’s important that there are students with many different perspectives in his classes.

“A global perspective is not always the right one, and we sometimes need to listen to someone with a very local background. I personally believe,” he says “that each and every one in the classroom has a positive contribution to make, and they do not need to have a global background. In the midst of a globalized world, listening to others is a must, and challenging one’s opinions and beliefs is the only way to grow and move forward.”

After spending six months in New York, Soliman says that the city definitely feels like a future home to him. He loves the diversity, and the fact that “you can almost feel the pulse of the world” in New York. He still wants to travel and to discover new cultures, but he already feels completely at home in New York City.

As for a future career, he’s still deciding. He has future plans for some internships, and has explored several fields over the last few years, helping him more clearly define some of his goals.

“Now I know that I want to do something innovative, I want to have an impact on people’s lives and be useful to the community,” says Soliman. “I had the chance of living an international experience and studying at top universities. This puts a lot of responsibilities on my shoulders, and I am determined to achieve great things.”