The two began experimenting with pop-up dinners as an unorthodox social experiment. However, their events soon took off, and six months later, they decided to scale up their project by building a platform for diverse dining experiences. 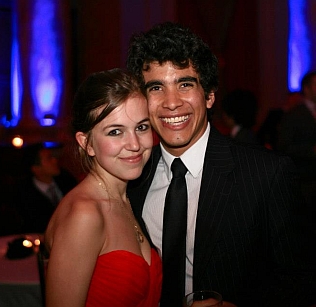 To date, BogotaPopUps has provided 17 handcrafted dinner parties, brunches, cooking classes, and jazz evenings at locations across the city of Bogotá, Colombia, serving more than 200 dinner guests, from more than 30 nationalities, at its tables. The events strive to create experiences that match the feel of a dinner celebration with friends, fostering a broader humanitarian awareness and global consciousness that can be gained while discovering new ethnic food systems and cultures. The BogotaPopUp team is now working to create a network of trusted suppliers, who produce food in a socially and environmentally responsible way.

Still under the age of 30, the BogotaPopUps co-founder Andrés Lizcano Rodriguez has led a very impressive young life. He attended college in his home country of Colombia at Los Andes University, where he studied mathematics with a minor in law, graduating with high honors.

During Andrés’s time at Los Andes, he spent a year abroad in Montpellier, where he co-founded the Montpellier Branch of an NGO called Foundacion YOCreo En Colombia. His goal was to prove to the outside world that Colombia was not just suffering from armed conflicts involving drug-trafficking and terrorism, but that it is also a country with a long and distinguished history, diverse cultural heritage, and immense economic potential.

As a Lohez Foundation Scholar, Andrés completed his studies in 2013 for a dual master’s degree in International Development between Sciences Po in Paris and Columbia University in New York, believing his experiences in both America and France helped prepare him to take the risks needed to effect real change in Colombian society.

After graduating, Andrés set his sights on achieving a career as a public intellectual and, eventually, on becoming Colombia’s official Ambassador to the United States and/or France.

Since graduating from Columbia University, Andrés has held a variety of positions. He served as a Columbia University Capstone Analyst for the Citi Institutional Clients Group, where he conducted research on legislation and international regulatory coordination and designed an analytic framework for Citibank’s incremental business.

He was also a World Affairs Editor at The Morningside Post, writing and editing articles for Columbia University’s School of International and Public Affairs’ newspaper. At around the same time, he was a teaching assistant for the graduate course, “Economic Development in Latin America,” at Columbia University. The following summer, after graduation, Andrés served as an Advisor at Think Impact in Ghana, where he facilitated the learning experience of international scholars working with the rural Ghanaian population, designing and implementing social enterprises, as well as planning and conducting training and workshops, and documenting the scholars’ progress throughout their journey.

Andrés returned to New York that autumn to work in Media and Communications at Reboot, defining and implementing a social-media strategy for the company, as well as conducting media monitoring in the fields of information and communications technology, open government, and institutional reform/public financial management.

Moving on from that position in February 2014, Andrés became an empowerment analyst at Univision Communications in Miami, Florida. There he created a new system to track workflow, and he designed an impact evaluation of the Empowerment Unit’s work.

He finally settled at a long-term position at the National Planning Department in Colombia in September 2014, where he is currently the Misión para la Transformación del Campo (advisor). Here he is responsible for the competitiveness strategy, which suggests guidelines for Colombia’s medium-term agricultural competitiveness policies and meets with policymakers, private- and non-profit sector leaders, and farmers in order to understand current policies and analyze long-term trends.

With this incredible resumé, Andrés has built BogotaPopUps from the ground up with his partner Sara. They and the rest of the BogotaPopUps team will soon be paying an exploratory visit to an organic farm, and will also be holding a two-day cooking class in – yes – a castle during a November weekend.

For more information visit www.bogotapopups.com, or email the team at bogotoapopups@gmail.com!