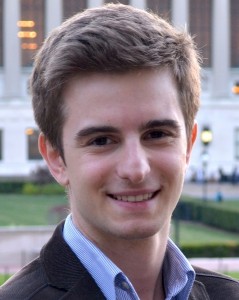 “To me, America is in essence the land of courage,” said Pierre Savary, a 2015-2016 Lohez Foundation Scholar. “American bravery is made visible by symbols such as the Freedom Tower, built in the aftermath of the biggest terrorist attack in US history, where the Twin Towers once represented New York, and it is now the highest skyscraper in the Western Hemisphere.”

During his undergraduate years at Sciences Po in Paris, Pierre had already had the opportunity to study in the United States, spending a year abroad at the University of California-Berkeley. There he studied in the Departments of Religious Studies and Peace and Conflict Studies. The American spirit of coexistence that he discovered in California became of particular significance to him, inciting him to come again to the United States.

The theme of coexistence is one for which Pierre has developed a great interest – indeed, even a degree of passion.

“This is why I went to UC Berkeley and studied in SIPA’s International Security Concentration,” he said, “to learn more about terrorism and understand better why some people of my age, sometimes even younger than me, choose the path to violence. I am involved in interfaith dialogue activities because I believe this is a very powerful and efficient way to fight extremism.”

While completing his dual degree at Columbia University, Pierre served as a communications intern at the Consulate General of France in New York City. There, he assisted in drafting speeches and other official communications for Consul General Bertrand Lortholary and other diplomatic personnel. It was a position that afforded him special insight into the workings of a diplomatic outpost immersed in the day to day issues of foreign relations.

After graduation, Pierre spent several weeks training in a military camp in Southern France to become a Reserve soldier in the French Army. “As a reserve soldier,” he said, “I will help protect tourism sites in Paris and everywhere, but also religious places, which is very important to me: churches and synagogues, but also mosques.”

Pierre’s current position is as an intern at the French Embassy in Amman, Jordan.

“My position in Amman involves working with attachés who directly provide advice to the French Ambassador,” said Pierre. “I write memos and reports on many various aspects of the life in Jordan and of the Jordanian people, from politics to social issues.”

“I truly believe that choosing the side of religious and cultural tolerance requires greater courage than choosing the side of hatred,” Pierre concluded. “I have chosen mine, and this is why I have developed such a great affection for a city that amply represents those core values: New York City, in the United States of America.”