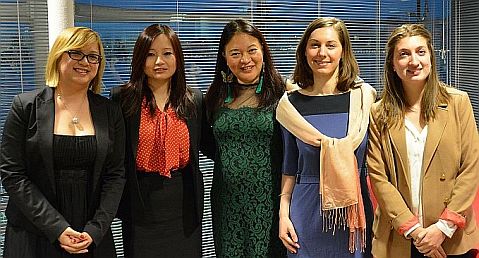 The Jérôme Lohez 9/11 Scholarship Foundation celebrated its 2013-2014 Scholars with dinner, drinks, awards and a round of speeches and recognition, during a festive evening on May 1, 2014.

The event was held this year in the Lounge and Conference Area of the Wesley J. Howe School of Technology Management, located in the Lawrence T. Babbio Center on the Hoboken, N.J., campus of Stevens Institute of Technology.

The Babbio Center fourth-floor setting offered spectacular views of Manhattan, stretching from Midtown to the Downtown Financial District. The early part of the evening featured a magnificent Italian buffet dinner, provided by Stevens’ in-house caterers, Sodexo, who staffed the event with members of their outstanding food service team. French red and white wines were selected and delivered this year by Tranquility49 LLC, public relations advisers to the Foundation.

For a second year, the Master of Ceremonies role was filled by Professor Daniel Duchamp, Head of the Computer Science Department at Stevens, who introduced each of the scholars and their presenters in the Howe School Conference Room, backdropped prominently by the glittering Empire State Building.

Ms. Annabelle Libeau, France, who is receiving her Dual Degree from Sciences Po and Columbia University, was introduced by Mr. Stephane Bouniol (left), founding board member of the Foundation and Vice President at Credit Suisse in New York.

All of the students spoke of having grown through their international exchange experiences, and described how these experiences are a fulfillment of the Lohez Foundation mission of building cultural bridges through a new generation of young global leaders. 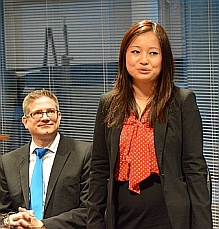 Also in attendance at the ceremony were the following guests:

Professor Duchamp brought the formal part of ceremonies to a close with the following observations:

“The Lohez Foundation professes a vision focused on cultivating a class of young leaders with a truly global outlook,” he said. “The organization is looking to build its executive and advisory boards, its academic and corporate alliances, and to grow its modest endowment into a competitive resource for increased cultural exchange and mutual understanding.

“In coming days, the Foundation will debut its new online fund-raising home at CauseVox.com, as well as premiere one of several promotional videos that will be posted around the web, aimed at increasing awareness.“

Photos for the evening were captured by Mr. Te Wu, a former Visiting Professor at Stevens and a cousin of Foundation Chair Ms. Dening Wu Lohez. 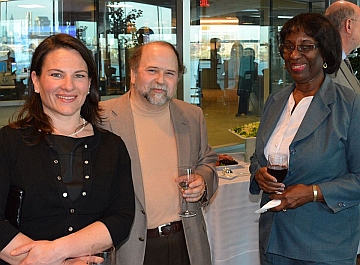 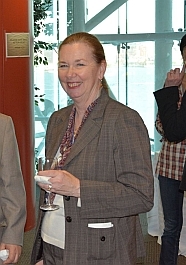