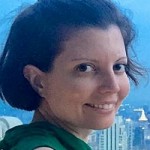 Sibylle Eschapasse is originally from Paris and has been living in New York since 2002. She is a graduate of Sorbonne University and is working at the United Nations in the Counter-Terrorism Committee Executive Directorate. She is actively involved in the French and Francophone communities of New York. Sibylle is the President of the Association of French International Civil Servants at the United Nations, as well as serving in other Boards and Associations, including the Committee of French Speaking Societies. She has a passion for philanthropy and writing, and is the author of a children’s book, “Argy Boy, a New York Dog Tale,” and is a weekly contributor to the Arts & Style Section of The Epoch Times.