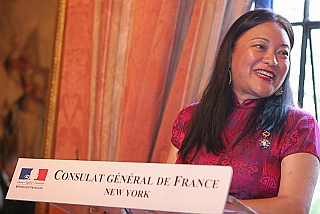 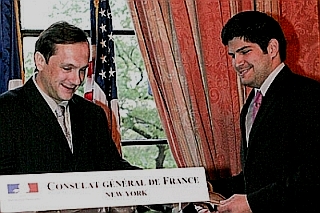 The French Consul General in New York City, Mr. Bertrand Lortholary, presided during the May 1, 2013, Awards Ceremony at the French Consulate in New York, recognizing the 2013 student recipients of the Lohez Foundation Scholarships. It was the first such occasion in which two French students studying at universities in China were recognized for their achievements.

The MC for the Awards Ceremony was Professor Daniel Duchamp, Head of the Department of Computer Science in the Schaefer School of Engineering and Science at Stevens Institute of Technology.

“Recently,” Dr. Duchamp said in his opening remarks, “I had the honor of chairing the Selection Committee that determined which candidates would be awarded this year’s Lohez Scholarships. In the process, I came to know and appreciate the mission and purpose of the foundation and its history.”

Duchamp noted that the Jérôme Lohez 9/11 Scholarship Foundation was created in 2005 by Dening Wu Lohez in memory of her late husband. “As Dening has explained in numerous media interviews,” said Duchamp, “her chief aim was to help bridge the cultural gap that she perceived to be widening between France, the land of Jerome’s birth, and the US, which had become their adopted home as a married couple.”

Duchamp (below, right) reminded the audience that both Jérôme and Dening had met as graduate students at Stevens, accounting for the “close and deepening bond between Stevens Institute and the Lohez Foundation,” adding that “the foundation also benefits from a significant collaboration with the Alliance Program at Columbia University, where Dening Lohez is also an alumna of the School of International and Public Affairs.” 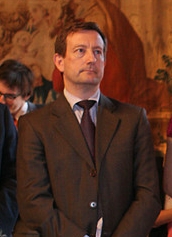 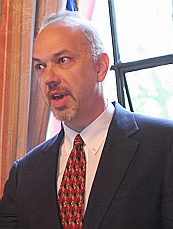 Before the awards presentation, mention was also made of some of the evening’s other honored guests, beginning with Consul General Lortholary (left), and the French Elected Representative for the Eastern United States, Mr. Richard Ortoli, who earlier had presented Ms. Lohez with the Chevalier Medal of the French National Order of Merit for outstanding international service.

Also in attendance were Dr. Michael S. Bruno, Dean of the Schaefer School of Engineering & Science at Stevens; Dr. Gregory Prastacos, Dean of the Howe School of Technology Management at Stevens; Monsieur Patrice Beliard, CEO of Beauté Prestige International, whose company creates, develops and markets the fragrances of Issey Miyake, Jean-Paul Gaultier and Narciso Rodriguez; Mr. Allan Chapin, Chairman of the Board of the French-American Foundation; Mr. Martin Bischoff, Managing Director of the French-American Chamber of Commerce; Dr. Ann Bynoe, Chair of the Economics Department at Pace University; Ms. Nicole Panzica, Student Representative to the Ramapo College Board of Trustees, and Associate for Creative Marketing with Tranquility49 LLC, media consultants to the Lohez Foundation; and Ms. Dawn Da Silva, Assistant Vice President for Development, Stevens.

Thanks were also given to Mr. Yann Yochum, Deputy Consul, Head of Press and Politics, for the kind assistance of his office; and Mrs. Anne-Sophie Bris, for her assistance in coordinating the evening’s events. 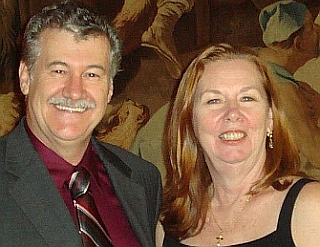 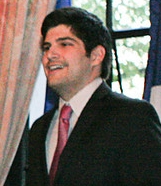 Mr. Bouniol, Vice President at Credit Suisse, co-founding board member of the Lohez Foundation, and representative of EPITA, from which institution he holds a dual graduate degree in concert with Stevens Institute, presented the first award to a 2013 Lohez Scholar, Monsieur Alexandre Montfort (right), who is completing a dual graduate degree from EPITA and Stevens Institute of Technology.

Presenting the third scholarship award of the evening was Ms. Barbara Wing, co-founding board member of the Jérôme Lohez 9/11 Foundation.

Dr. Duchamp then mentioned that the Lohez Foundation expanded its reach in 2012 to include alliances with universities in China. Two scholars from France studying in China were chosen to receive awards from the Lohez Foundation. One, Monsieur Silvio Ghiglione, has been completing studies between the Université Paul Valéry and the Beijing Normal University; the other, Madamoiselle Louise Battus, has been completing a joint degree between Sciences Po and Shanghai Fudan University.

A brief piece of video coverage from Shanghai Television’s English-language news was then screened for the assembled group, showing a ceremony that was held last November at the home of French Consul General Emmanuel Lenain in Shanghai, attended by Ms. Lohez and the two Lohez Scholars in China.

Before the evening drew to a close, Dr. Duchamp summed up the themes of the Awards Ceremony: “The Lohez Foundation professes an impressive humanitarian vision, focused on cultivating a class of global leaders with a truly global outlook. The organization is now looking to build its executive and advisory boards, its academic and corporate alliances, and to grow its modest endowment into a competitive resource for increased cultural exchange and mutual understanding. If anyone here wishes to become part of that effort,” he concluded, “or knows someone who might, now or in the near future, please do not hesitate to contact Ms. Lohez to schedule a discussion of the possibilities and the opportunities that lie ahead.” 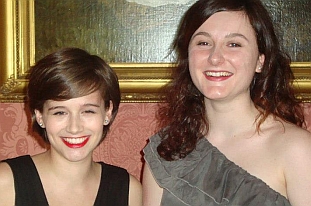