Roxane Cassehgari, a 2012 Lohez 9/11 Foundation Scholar, has been named an Aryeh Neier Fellow at the Open Society Justice Initiative, a program of the Open Society Foundations. This distinguished two-year fellowship provides practical work experience to expand the capacity of young lawyers and advocates working internationally on human rights issues.

Roxane is currently based in New York and is working alongside a team promoting criminal justice for grave violations of human rights. 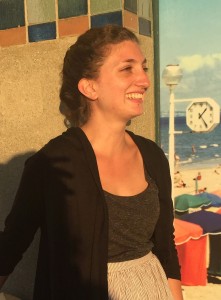 “OSJI is one of the few places with a team of human rights lawyers focusing on a wide range of human rights issues, such as international justice for mass atrocities, ethnic discrimination and counter-terrorism,” she said. “It’s a great opportunity to work on these issues while receiving the mentorship from experienced lawyers.” OSJI lawyers take part in advocacy, litigating before international tribunals and national courts, UN treaty bodies and regional human rights courts. They also work with civil societies to empower them to demand enforcement of human rights.

Roxane has a particular interest in working with migrants, specifically those affected by the various crises unfolding in Europe, Central America and in the Pacific (Malaysia). Her passion for this work has roots in her own family’s migrant story – her parents both immigrated to France as students, seeking a better future. Her father emigrated from Iran soon after the Islamic revolution, and her mother left Colombia, a country then ridden with violence.

Luckily, notes Roxane, her parents’ stories were not nearly as atrocious as the conditions faced by migrants who are now fleeing current ongoing conflicts. Her family’s story and current crises have inspired her to develop a project around this issue at OSJI.

“Thanks to the mentorship and through the various team projects,” she said. “I think I will be able to shape a career that will revolve around migrant issues, and hopefully set out an advocacy strategy encompassing all the legal tools I have learned throughout my career: international human rights law, international criminal justice and also transitional justice.”

Getting hands-on experience with different countries is something Roxane is most looking forward to.

“I am quite excited to have the opportunity to directly work with civil society organizations and receive their feedback on the intricacies related to the fight for human rights on the ground,” she said. “I hope to immerse myself in some country contexts, hopefully in Spanish- and French-speaking countries, to use my language skills, and to understand fully the complexities of each situation. Every country is different, and yet, each can learn from others’ experiences.”

During her two-year fellowship, Roxane will rotate to work with different teams. She anticipates traveling globally as part of her work, and notes that she’ll likely travel to The Hague for meetings related to the International Criminal Court.

The fellowship will also enable Roxane to focus on one of her priorities: being a fully-fledged professional in English, Spanish and French. She wants to work on issues related to different countries, gaining knowledge that will be useful in many different contexts. She hopes to draw lessons from this work that can be shared with other audiences. She also hopes to write blogs and articles and to participate in publications as part of her fellowship.

In her career as an international lawyer, Roxane hopes to develop partnerships with local organizations to help them take ownership of international human rights law and criminal law so they can address issues in their countries.

“I believe in strengthening the local civil society. I don’t want to reinvent the wheel. Rather, I want to listen to what people on the ground have to say,” she said.

Roxane is a graduate of the University of Cambridge and the Université Panthéon-Assas Paris II, where she received a Master of Law degree and a Certificate in International Legal Studies.

After graduating from the Université, Roxane worked as an intern for the International Organization for Migration in Bogotá. Three months later, she was deployed by the organization to support the earthquake relief operation in Haiti. Her main duties consisted in delivering assistance to the most vulnerable individuals of the displaced population: women, children, the elderly and the disabled. She learned how a United Nations peacekeeping mission works and how key information is transmitted from the field to high decision-makers to help improve response on the ground.

Roxane studied human rights at Columbia University and received her LL.M. from Columbia Law School in 2013.